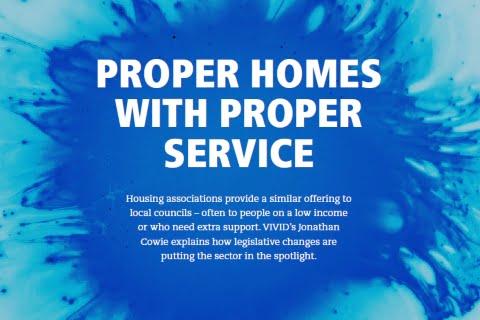 The Grenfell Tower fire in June 2017 left 72 people dead, just as many injured, and was the UK’s worst residential fire since the Second World War. If there is a positive to come out of that horrific night in North Kensington however, it’s that the increased focus on fire safety, consumer standards and transparency, might save lives in the future.

For Jonathan Cowie, chief operating officer at housing association VIVID — and formerly chief executive at CityWest Homes in Kensington’s neighbour, Westminster – legislative changes are firmly on his radar. But it’s not just
tower block related maintenance, fire safety and building regulations are a priority for the housing sector too.

The Human Habitation Bill, which passed in 2019, has a sharp focus around standards in the home, particularly aspects such as mould and damp. The sector is also awaiting the outcome of the social housing Green Paper, with its expected focus on the safety and quality of social housing. Universal Credit, too, is proving a challenge with many claimants struggling to cope with a five-week wait for their first payment. And, although Cowie doesn’t bring it up, there’s mention in VIVID’s corporate plan about the frustration of having a 9th housing minister since 2010, which does little for continuity.

‘The passing of the Human Habitation Bill poses new challenges to the sector,’ he says. But that isn’t all. ‘Following the well-documented escalation of PPI claims, legal companies are now shifting their attention to potential claims under the Bill, and are often targeting vulnerable customers. While it’s right for customers affected by poor management to be fairly represented to challenge their landlords, this could result in long legal battles and high fees that prevent organisations focusing on rectifying problems quickly and making the investment where it’s needed,’ he says. All in all, it’s an interesting time for housing associations. In England alone, there are around 1,500, providing two million homes for five million people. Cowie, who is based in Hampshire, has day-to-day responsibility for 31,000 homes, 70,000 tenants and more than 500 employees.

Cowie says in addition to new recommendations on fire safety, the most significant of the legislative changes is likely to be the Green Paper. ‘Post-Grenfell, we’re seeing greater mistrust in organisations,’ he says. ‘The respect
agenda — treat me with respect, keep me informed — is a key priority for our customers,’ he adds. ‘In addition, the housing regulator is looking to move to tougher enforcement of consumer standards. No one knows what that will look like yet, but housing associations will need to be more transparent and involve our customers far more than perhaps we’ve done previously.’

That’s not to say that the impact of Universal Credit on VIVID’s income is being ignored. ‘Like a lot of associations, we’re putting in extra support and steps to help residents through that process. We have a team that supports people. In some cases, it might be about helping them to budget because they may never have paid rent directly before. For many, it’s always been paid straight to a housing association by housing benefit.’

Over the past year, VIVID has also worked with customers to identify other benefits they’re entitled to. ‘We’ve secured an extra £4million of benefits and extra income that our customers haven’t claimed,’ he says. ‘We want to create bright futures and our goal is to ensure our customers are happy in their home and they’re continuing to pay the rent. We put extra effort into doing that, so that they can maintain their tenancies, including assisting customers into employment. Last year we helped more than 200 residents find and secure a job,’ he says.

As you might expect, training for customer-facing staff is extensive. As well as Institute of Customer Service training, there is also specialist provision. One of these is safeguarding. ‘We run specialist vulnerability training for our neighbourhood and property services teams. We also deal with conflict management and we’ve recruited two dedicated well-being specialists who work with our customers who have specific needs, such as mental health issues.

‘They’re the bridge between us and the healthcare providers,’ says Cowie. ‘We also have specialist resources that deal with our vulnerable older customers.’ This prompts Cowie to reflect on what’s important to VIVID customers. ‘As with every sector, customers want it to be easy to contact us and get their problem resolved. Are we easy to do business with? I’d say as a sector we’ve got a long way to go.’

One area in which the housing association is making strides, however, is ensuring people are happy with the quality of their home. ‘I wanted to ramp up how we engage customers. Kitchens is a good example of this. We replace kitchens every 15–20 years and we now involve customers in that process,’ he says. ‘We’re increasingly registering customers who’ve shown an interest in certain areas. So, for those who are interested in standards around kitchens and kitchen design, we contacted them and we then involved some
in the procurement process.’

VIVID has subsequently re-written the rules around how it installs kitchens. ‘It doesn’t cost us more, we’re just more intelligent with the design. As an example, a customer told us it would be really helpful if we included larder cupboards. It’s a simple thing, but it makes a big difference to the usability of their space.’

Another issue is whether customers feel safe within their neighbourhood and community. ‘The question for us as a sector is, how are we tackling those things? It’s not necessarily something we’ve previously seen as our responsibility, so it’s a case of changing our approach.’

When it comes to measuring satisfaction, Cowie is realistic. ‘It’s an ongoing journey,’ he says. ‘Historically, we’ve been very inward-looking and only benchmarked ourselves against other housing associations. Increasingly, we’re benchmarking cross-sector. Taking The Institute of Customer Service’s UKCSI cross-sector results, general satisfaction across all sectors is about 77%. Our perception survey has gone up in the past couple of months and is at around 78%. We want it to be above 80% and are working hard to achieve this.’

The big question, of course, is how much attention he can afford to give customer service when as a COO, and previously a CEO, he has other pressing concerns, such as hitting deadlines and budgets on a wide variety of projects. ‘I spend about half a day a week out with customers or with front line staff, or walking the estates,’ he says. ‘It’s all too easy to become disconnected from what you’re delivering, so this week I’ve spent a couple of hours with our resident council listening to their views; I’m out tomorrow for a walk around some estates with one of our neighbourhood officers and repairs managers. These people tell you what the issues are.’

In terms of customer service, Cowie has been a nonexecutive director of The Institute of Customer Service since 2016 and says it’s helped him enormously. He gives the example of Mark Gait, customer service director at O2 [see interview p16 in Customer Focus Magazine], who was talking recently about the challenge the company had with managing email. Customers said they wanted to use instant messaging more and so they adopted it. ‘It’s the technology of the day — which changes all the time — but they saw a high level of satisfaction, because they could interact in a way that suited customers and was also better and easier for the organisation,’ he says.

He has also set up a new service committee that brings together three board members and three customers from our customer engagement panel, as a vehicle to ‘review decisions and prioritise the services that matter the most’. Where to spend money is still a dilemma, however. ‘We can either add to the services we offer or put money into building more homes (VIVID acquired house-building firm Bargate Homes earlier this year). We’re a social business with clear aims — to build more affordable homes and to make sure we’re continuing to invest in our customers’ homes and supporting their well-being. The challenge is to get the balance right between those two.’ 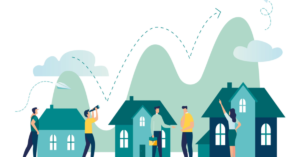 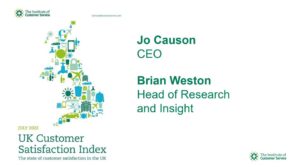 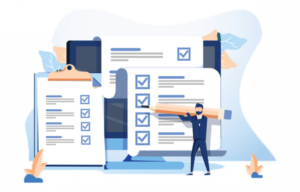