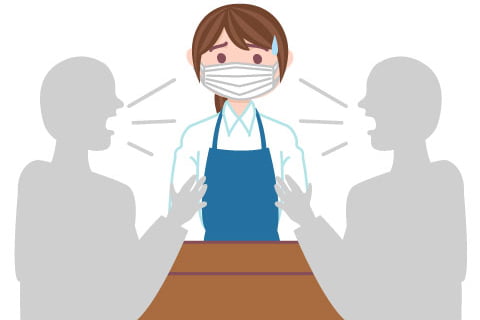 We launched our Service with Respect campaign in July last year, after our research amongst employees and customers showed a highly concerning rise in intolerant and abusive behaviour from customers towards front-line service staff during the pandemic.

The campaign has had hugely positive take-up and support, with over 130 organisations who between them employ over 1 million staff signing up to back it. This includes major businesses such as Sky, O2, first direct, Thames Water, Nationwide, LV=, M&S, Post Office and HMRC.

However, as encouraging as this is, new research that we have conducted to benchmark progress shows that in fact the situation is getting worse. Our survey amongst 1,000 employees and 1,000 customers found that over half of front-line staff (51%) believe customers are more intolerant now than they were six months ago – a worrying jump from 27% in our original research.

The prospects looking forward are not encouraging either. Over a third (34%) of staff say they’ve experienced greater hostility from customers since the third lockdown began at the beginning of January, and more than half expect the situation to get worse over the coming weeks and months.

For their part, four in ten customers feel that their interactions with brands have got worse during the pandemic, up from 23% in our first research. The number of customers who have witnessed others ‘raising their voices’ to staff has doubled, from 15% to 33%.

These findings are a real concern. Despite the fact that lockdown is due to be progressively eased from early March, it will nevertheless be some considerable time before things are back to anything like ‘normal’. Social distancing and mask wearing can be expected to continue for many months, maybe into 2022. Remote working will also be with us for a long time – perhaps permanently for at least some of the working week – meaning that many staff dealing with customer enquiries and complaints online and over the phone will continue to do so on their own at home, lacking the usual support networks around them.

We can also expect supply issues for certain goods to be with us for the foreseeable future. Customers are having to wait many weeks for a whole variety of products to come in stock and be delivered, and this situation is only likely to ease gradually. Patience and understanding will continue to be needed.

Of course, the great majority of customers are showing increased tolerance and flexibility. It is also understandable that, as the pandemic stretches on, people become more frustrated and sometimes it’s hard to hold that in.

But abuse and hostility towards essential staff who are trying to help is simply not acceptable. There is a genuine danger that the longer it goes on, the more ‘normal’ it will become to berate front-line staff. But it is not normal behaviour and nothing should be allowed to normalise it.

We need to redouble our efforts to address this, loudly and visibly, to turn the tide and prevent a new culture of intolerance setting in. That’s why we are continuing to vigorously promote our Service with Respect campaign. We will be discussing it again this week with the All-Party Parliamentary Group for Customer Service, who have been tremendously supportive. And we call on more organisations to sign up and publicly back the cause.

Not only have front-line staff played a vital role in keeping the nation running throughout the past year, but they will also be the backbone of efforts to rebuild our economy post-crisis. Both the

Government and employers have a duty to support and protect them, through increased protection via the law and additional training to prepare them for the increased requirements of their role.

At The Institute, we have launched a new set of training modules designed to help employers support their staff on these issues. Details can be found at Service with Respect – Training.

Nearly 80% of the UK’s workforce work in customer-facing roles. They have a right to be treated with courtesy and respect. Let’s show that their contribution really is valued and keep fighting to ensure human decency wins out.