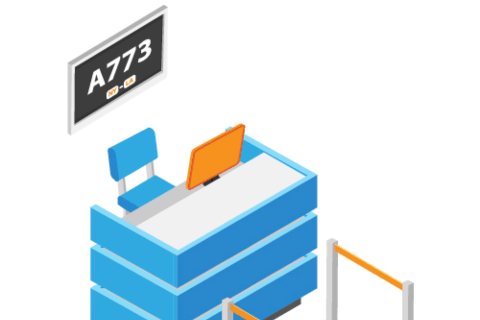 A trial at Gatwick Airport that aims to speed up boarding times has met with some success, in a move that could spell good news for frequent flyers and holidaymakers.

The airport is working with EasyJet to trial different boarding methods according to the passenger demographics of flights.

For example, certain patterns can be used if there are more families on a particular flight, while the ‘window-to-aisle’ boarding method, whereby passengers seated next to windows board first, followed by middle-row customers then aisle passengers, is best suited to individuals and business passengers.

The two-month trial has already met with some success, with Gatwick revealing that in one case 158 passengers boarded in 14 minutes, an improvement of two to three minutes compared to the average time. The airport revealed that the different methods could reduce boarding times by around 10%.

Gatwick is also exploring alternatives to the usual tannoy boarding announcements at gates. Passengers are instead being informed which seat numbers are ready to board courtesy of a digital screen.

A spokesman for the airport said: “One challenge in any controlled boarding process is our ability to communicate the pattern to passengers and the willingness of passengers to comply. It is almost impossible to do that effectively through audio announcements.”

The airport revealed that the trial in collaboration with EasyJet is currently being run from one gate, but other airlines are expected to become involved. It said: “This is about improving the experience for passengers, not just in terms of making the boarding process more relaxing, but also helping to reduce delays.”