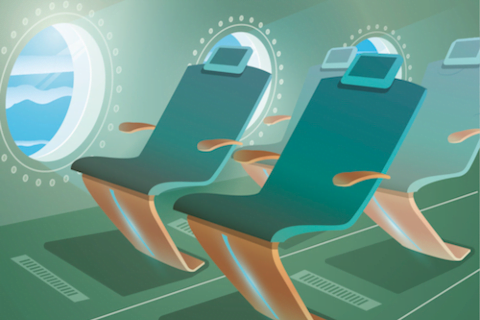 In Economy Class, the screens are now 11.6 inches, which is bigger than the old screens in the Upper Class cabin. Passengers can tune into over 100 movies or select from a variety of television shows.

In the Upper Class cabin, passengers have their own private booths with 18.5-inch touch screens that can be controlled using smartphones via Bluetooth. Upper Class passengers can also order on-demand food through the in-flight entertainment systems.

The plane also features a new bar/lounge in the Upper Class cabin called The Loft, where customers can drink and connect to a 32-inch screen via Bluetooth headphones.

In addition to the revamped interior offering, passengers will benefit from better cabin pressurisation and quieter engines, meaning a more comfortable flight.

An innovative tail camera also means that passengers can enjoy a high definition view outside the plane.

The luxury aircraft is currently operating on the route between London Heathrow and New York JFK on a single daily frequency, but Virgin Atlantic plans to expand the route to four times daily by the end of the year.